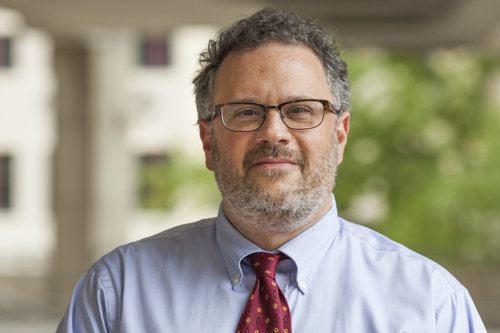 Q: Tell us about yourself. What do you do for the Festival?

A: I head up the Wisconsin’s Own selection committee, reviewing and curating films for the Wisconsin’s Own section of the Festival. I also do outreach and marketing, including creating the yearly trailer we show before the films. I’m also involved with hospitality and event planning, I help write up the film guide, and I introduce films and moderate some Q&As.

Q: What is the best part of the programming process?

A: The best part is discovering a great new film that almost no one has seen yet. And getting to talk about it with the rest of the selection committee, and then getting to talk to and meet the filmmaker and discuss their work with them.

Q: What grabs your attention when screening films for inclusion in the WFF program?

A: Last night I watched Over the Top, the 1987 film featuring Sylvester Stallone as an arm-wrestling truck driver. It’s kind of a ridiculous movie but have to admit I was impressed with the widescreen cinematography, and Menahem Golan, the infamous Cannon Films impresario, managed to do a decent job directing Stallone through a really silly script.

A: That’s a very hard question to answer, but I do have a small batch of movies I’m always happy to return to, like: Bringing Up Baby, Jaws, Halloween, The Hustler, My Cousin Vinny… at least those are the ones that popped into my head just now.

Q: Do you have a memorable Festival anecdote to share?

A: In 2015, we were showing Kurt Cobain: Montage of Heck, this really intense documentary about the Nirvana lead singer/songwriter, at the Capitol Theater. We were playing it really loud and it was a full house, and about halfway through, the digital projector got too hot and shut down, so we had to take an unscheduled intermission. I was in the crowd watching with everyone else, but then realized I was the senior staff member in attendance, so ran up onstage to let everyone know what the situation was. It was such an intense film and I think most people were happy to be able to take a breath, stretch their legs, grab a drink in the lobby and discuss the film so far with their friends and neighbors. That was as festive and communal a moment as I’ve had at the Festival.

Q: If you weren’t working at WFF, what would you do?

A: Maybe I’d be making movies myself, or writing songs, or delivering pizzas. Perhaps all three.

Q: If you were a WFF patron, how would you plan your Festival?

A: I would take my time and really read through the film guide when it comes out. Figure out which films sound the most interesting, figure out how much time and money I have to spend at the Festival, then figure out a way to spend a little more time and money than I thought possible, and then figure out a way to see as many of those interesting films as I could. Personally, I get a little bleary-eyed if I’m seeing more than three movies a day, so I would try to take that into account. Push my limits, but not TOO much.